Monaco Grand Prix Date: 26th May 2019
Track: Monaco Street Circuit
Resolute Travel provides you with a great opportunity to experience the 2019 Monaco F1 Grand Prix as well as the sights, sounds and people of Monaco & Nice. Our tour hotel is in Nice, ideally located within easy walking distance of the city’s finest restaurants, nightclubs and shopping centers. Combined with your return flights, grandstand race tickets with an excellent vantage point we give you an unforgettable 2019 Monaco Formula 1 tour. Nice is the capital of the French Riviera and is a vibrant, colorful, sophisticated city, and is the place to stay if you are looking for an excellent and wide ranging selection of entertainment. Nice is conveniently located only a 20 minute train ride from Monaco.

4* HOTEL MASSENA NICE
This property is 6 minutes walk from the beach. Best Western Plus Hôtel Massena Nice is a design hotel in the heart of Nice, just 200 m from the beach. It offers air-conditioned rooms equipped with a flat-screen TV and free WiFi access. The property is with a 5-minute walk from Nice’s Old Town and Massena Tram Stop. The guest rooms are equipped with a minibar and tea and coffee making facilities. Some rooms feature a balcony or a terrace. Most private bathrooms include bathrobes. An American buffet breakfast is served every morning at Hôtel Massena. Guests can also enjoy a drink in the hotel bar and room service is available upon request. The Promenade du Paillon garden, leading to The Promenade des Anglais, is just 100 m away. Nice Train Station is 1 km away and private parking is available on site. The bus for Nice Côte d’Azur Airport goes from the Bus Stop located an 8-minute walk away from the hotel. 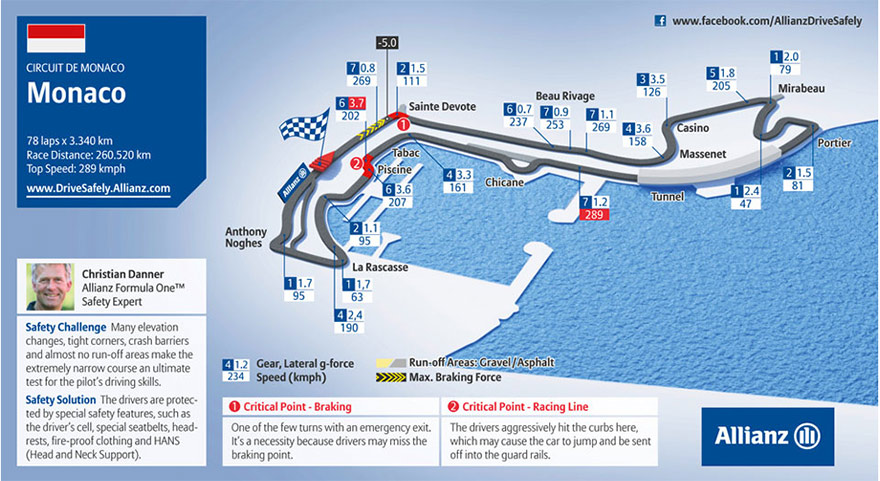 The Principality has a lot of history in its own right, with the Grimaldi Family having reigned supreme since 1297. In a Formula One context, the track is one of the greatest challenges on the calendar; it staged its first (pre championship) Grand Prix in 1929 and has remained largely unchanged ever since.

Celebrities flock to the race like bees to a honey pot because it’s the world’s most glamorous sporting event. To name a few that have visited in recent years: actors Brad Pitt, George Clooney, Hugh Grant and Liz Hurley, soccer star Roberto Carlos and Chelsea Football Club owner Roman Abramovich.

“There are too many things to do in Monaco to fit them into 24 hours,” says David Coulthard, who has been a resident in the Principality since 1994. “However, I can suggest a good night out.”

The nearest international airport is Nice in France. The most hassle-free way to enter the Principality from there is by train, with the journey taking around 40 minutes. Alternatively, it’s a 40-minute drive via the autoroute, or an hour if you take the more picturesque coastal road. Bear in mind, however, that parking in Monaco over the race weekend is very difficult, to say the least.

The first thing to remember is that the on-track action starts a day early. Unlike every other race on the Formula One calendar, the first day of practice at Monaco is on Thursday. Friday is traditionally a rest day – ideal for some leisurely sightseeing. There is no such thing as general admission in Monaco because it’s not possible to walk from corner-to-corner. You have to book a grandstand seat, with the cost reflecting the vantage point around the lap.

Unlike in neighbouring France, tipping (‘pourboire’) is not the norm because most restaurants and taxis add 10 percent onto their bills as a matter of routine.

The Monaco Grand Prix is the one race of the year that every driver dreams of winning. Like the Indy 500 or Le Mans, it stands alone, almost distinct from the sport from which it was born. A combination of precision driving, technical excellence and sheer bravery is required to win in Monte Carlo, facets which highlight the differences between the great and the good in Formula One.

The Armco barrier-lined circuit leaves no margin for error, demanding more concentration that any other Formula One track. Cars run with maximum downforce and brakes are worked hard. Overtaking is next to impossible so qualifying in Monaco is more critical than at any other Grand Prix.

The Portier corner is key to achieving a good lap time around Monaco. It is preceded by the Loews hairpin, the slowest corner in Formula One, and followed by the tunnel, one of the few flat-out sections of the track. Some great names have ended their races in the barriers here, most notably Ayrton Senna and Michael Schumacher.

To win in Monaco places a driver’s name on a list that includes many of history’s all-time greats. Both Graham Hill, the man nicknamed ‘Mr Monaco’, and Schumacher have won it five times, Alain Prost took four victories, whilst Stirling Moss and Jackie Stewart each won here three times. But the record of wins in the Principality resides with the Senna, who won in Monte Carlo six times.

The race has been a regular fixture of the world championship since 1955, but in that time the circuit has changed remarkably little. Slight alterations were made for the 2003 event, in particular a new, gentler entry to the Rascasse corner, with even bigger changes in 2004, with a new pit complex and increased spectator capacity.

Single supplement
Add on R9400 to above price.