Belgian Grand Prix Date: 1st September 2019
Track: Spa Francorchamps Circuit
Resolute Travel provides provide you with a great opportunity to experience the 2019 Belgian F1 Grand Prix as well as the sights, sounds and people of Belgium. We can offer you a superb 4 star hotel ideally located in the beautiful and historic town of Maastricht. The hotel is located within easy walking distance of the town’s finest restaurants and popular tourist attractions, combined with your return flights, general admission or grandstand race tickets, to form the basis of an unforgettable 2019 Belgian Formula 1 travel package. You must book a minimum of 3 nights, which may be extended on request, to give you more time to explore Maastricht and the region’s numerous tourist attractions. Maastricht is located about 65 km from the Spa Francorchamps Grand Prix racing circuit. Hotel location is important when you book a Belgian F1 package – many tour packages on the market includes hotel accommodation in Brussels. Although these packages are generally cheaper the transfer time to and from the circuit is very long. High traffic volumes associated with F1 events can turn this into a 6 hour travelling ordeal each day!

4* Mabi City Centre Hotel in Maastricht
Hotel Mabi City Centre is situated in the historical part of the city, in a building where the Cinema Maastricht offered its services. The hotel offers a library, a salon and free Wi-Fi. The design of the rooms is contemporary, with warm colors and big windows. Each room is equipped with a flat-screen TV, luxury bedding and modern bathrooms. The hotel is located on a courtyard in the center of Maastricht. The theme of this hotel is Film. The hotel wants to revive and preserve its past by offering its own cinema. The Film theme is also present in the rooms in the form of large posters from classical blockbusters and Oscar winners. In the Salon you can enjoy your day with a cup of coffee or tea accompanied with a piece of local pie, while reading a magazine or book. In addition, Hotel Mabi City Centre offers an aperitif in the afternoons with a glass of wine and olives. In the mornings a breakfast buffet is served. The reception is at your disposal 24/7. The Onze Lieve Vrouwe Square, known for its cafés and terraces, is just a 10-minute walk away. The Vrijthof is a 5-minute walk from the hotel. Boschstraatkwartier is a great choice for travellers interested in shopping, friendly locals and restaurants. 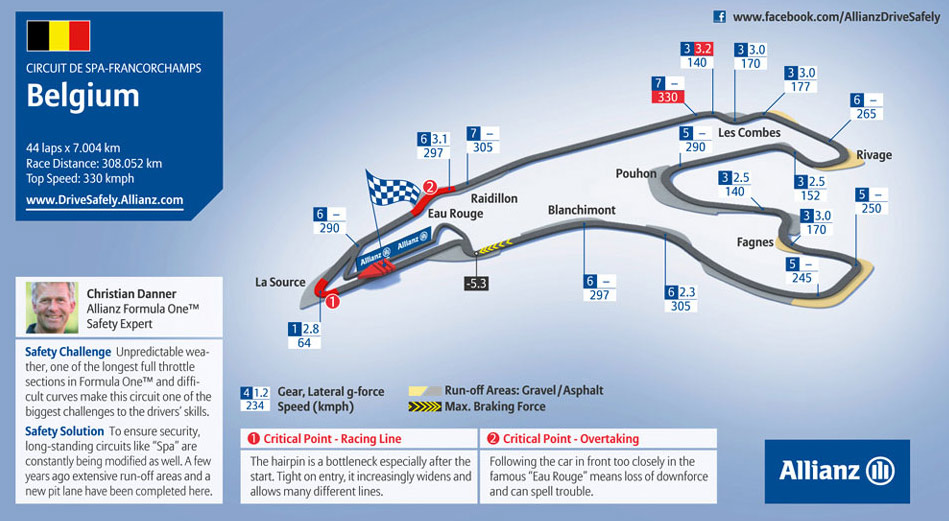 Aside from being the home to one of the greatest circuits on the Formula One calendar, Spa is recognised throughout the world for its water. The Romans were the first people to discover its natural springs deep in the Ardennes countryside, and people still visit the town today in search of hydrotherapy. The biggest industry in the town is the famous bottled water company, Spa.

The mention of water is never far from people’s lips at the circuit, which is eight kilometres from the town. One of the most fearsome corners on the lap is Pouhon, which translates into English as ‘water well’ and the Ardennes has a micro-climate all of its own, hence rain tyres are never far from the cars.

“The great thing about Spa-Francorchamps is that it hasn’t changed over the years,” says three-time world champion Niki Lauda. “The track is an old-style circuit and is still a great challenge to the drivers, and the surrounding area hasn’t been built all over and is still very beautiful. I enjoy coming here.”

The bright lights of Liege and Brussels are a 40-minute and two-hour drive respectively, so there is something for everyone at the Belgian Grand Prix.

At almost seven kilometres, Spa-Francorchamps is the longest track on the Formula One calendar. As a result, a general admission ticket may seem quite a daunting prospect because there is a lot of ground to cover – a lot of which is wooded and hilly. In reality, however, it is arguably the best way to see one of the greatest tracks on the calendar. For those who prefer a seat, there are grandstands at all the key corners – La Source, Eau Rouge, Pouhon etc – and ticket prices are divided into three groups: gold, silver and bronze.

You must sample the very tasty local speciality – french fries and mayonnaise. And don’t forget a raincoat for the fickle Spa weather.

Belgium’s Spa-Francorchamps circuit is among the most historic on the Formula One calendar, having hosted a (non-championship) Grand Prix as long ago as 1924, and remains one of the most popular venues with drivers and fans alike.

Run on narrow public roads, the original Spa layout was an amazing 14.9 kilometres long and notoriously dangerous. The lap distance was reduced slightly over the years, with some corners eased, but when the ‘old’ circuit staged its final Grand Prix in 1970 it still measured just over 14 kilometres and remained staggeringly quick – Chris Amon set that year’s fastest lap at an average speed of just under 245 km/h.

Spa did not return to the calendar until 1983 and then in drastically revised form, with lap distance cut to just under seven kilometres. Somehow, though, the circuit’s magic was retained. Around two thirds of the lap used the original layout and the legendary Eau Rouge corner remained intact. Only the new Bus Stop chicane on the run down to La Source drew criticism.

More than twenty years on Spa remains the longest circuit on the calendar. Its mix of long straights and challenging fast corners, coupled with its picturesque setting, means that most drivers still rank it among their favourite tracks.

The weather is still notoriously changeable (it can often be simultaneously raining on one part of the track and dry on another) and Eau Rouge, with its high speed and sudden elevation change, maintains its reputation as one of Formula One racing’s most technically demanding corners.

Single supplement
Add on R4200 to above price.